How an incident in the aftermath of #2015NepalEarthquake changed the course of my (our) life!

Four months after the 2015 Nepal earthquake, I was on an assignment to document emergency response at Sangachok, a hilly village approx. 100 km north-east of Kathmandu. As I arrived there, I was guided by a local social worker to a site where a three-storey public school had completely collapsed. A huge crane was installed to clear the rubble that had pieces of broken classroom furniture scattered all over. Fortunately, the tragedy struck on a Saturday, a weekly holiday in Nepal. It’s hard to imagine the scale of destruction had the quake struck on a school day. Nevertheless, by late August, Nepal was recovering from the aftermath of the tragedy, and the focus gradually shifted from immediate rescue and relief to long-term reconstruction and rehabilitation even as millions continued to live in makeshift shelters and cracked homes.

An hour later, we climbed down a steep lane to arrive at a temporary school where children attended lessons in classrooms made up of tarpaulins, spread right next to the main road where vehicles breezed past every few seconds. My heart went out to the young kids who escaped one deadly disaster but could be part of another fatal incident any moment. A little further as we ventured into the community, we encountered a young girl who sustained spinal injuries during the quake and was sitting quietly on a wheelchair, outside her makeshift home. Asked why she’s at home and not attending school, the ten-year-old replied with teary eyes, “My school collapsed during the earthquake.” Incidentally, she studied in the same school that was destroyed on 25th April. ‘But aren’t children from that school studying in a temporary set-up nearby?’ I asked. “Yes, but I’m not allowed to attend that school. It’s not meant for disabled children like me…” she mumbled as tears rolled down her face.

The incident shook me to the core. I was appalled that even after a massive disaster where one could become disabled in a matter of seconds, people had no empathy for persons with disabilities. What would possibly go wrong if the young girl was allowed to sit in the classroom together with other children? That evening, as I returned to Kathmandu, I thought long and hard about the incident, and my role as a development worker. Why do we exclude persons with disabilities from most mainstream activities? What would it take for schools to accommodate both children with and without disabilities in the same classroom? Can a school be built with inclusion, empathy and compassion at its core?

Meanwhile, even as we discussed ideas and potential locations to set-up our inclusive school, Nepal was going through serious socio-political upheaval. A country united by natural disaster was deliberately divided by shot-term politics and propaganda. Within a span of two months, over 40 ethnic Madhesis were killed by security forces in the run up to the launch of the new constitution. Given these circumstances, we realized that mere inclusion on the grounds of ability-disability was not enough. If we dream of a truly inclusive society, we need a truly #inclusive #education system. A truly inclusive school therefore has to accommodate children from all social backgrounds and disabilities.

By the end of 2015, Nivedita and I were sure of our life’s mission: to set-up ‘Samaaveshi Pathshaala Foundation’ and gradually build it into a model organization that promotes all things ‘inclusion’. That said, schools are a microcosm of society and the foundation to build an inclusive society must start from an inclusive classroom. The roadmap was clear: to start our journey with an inclusive school called ‘Samaaveshi Pathshaala’ where children in their formative years are taught about diversity, empathy and compassion, as much as they learn other mainstream subjects at school.

At the outset, this is a powerful solution to fight the problem of low enrolment and high dropout among children from marginalized sections including those with disabilities. The long-term impact is: each child from such an inclusive school would grow up into individuals and torchbearers with all necessary knowledge, skills and sensibilities to take forward this movement of inclusion and inclusive education – and together build an inclusive society. As Desmond Tutu says, “Inclusive, good-quality education is a foundation for dynamic and equitable societies.”

In the subsequent years, life took several turns as Nivedita and I moved from Kathmandu to New Delhi, and continued to build networks and mull over setting-up our dream project. In September 2017, we became parents to a baby boy. While Nivedita stayed with our baby at her home in Guwahati, I took time out to scout for possible locations to establish ‘Samaaveshi Pathshaala’. Under the garb of assignments and duty travel, I explored several places in western India to conduct surveys and need assessments to understand the status of children with disabilities and their access to education.

Finally, in November 2017, we decided to set-up our first inclusive school in #KARJAT tribal block in the state of Maharashtra – approx. 100 kilometres from Mumbai, close to our alma mater ‘Tata Institute of Social Sciences (TISS)’ where we had conducted a two-day disability simulation workshop called ‘Challenging Challenges’ in 2011, under the supervision of its ‘Centre for Disability Studies and Action’.

Cut to September 2018, Nivedita and I moved to Karjat with our year-old son, Aditya. After a string of challenges and roadblocks, we rented a two-room space in #KASHELE: a bustling market place on Karjat-Murbad road, and a strategic intersection that connects over 50 tribal villages in Karjat block with a population of over 200,000.

On 3rd Dec 2018, on the occasion of ‘World (Disability) Inclusion Day’, we formally inaugurated ‘Samaaveshi Pathshaala’ – an inclusive kindergarten with a total of 12 children aged 3-6 years, including six children with disabilities (one child with attention-deficit/hyperactivity disorder (ADHD), two with speech and hearing impairments, and three children with mild to severe cerebral palsy), from five villages in and around Kashele.

The future is inclusive! 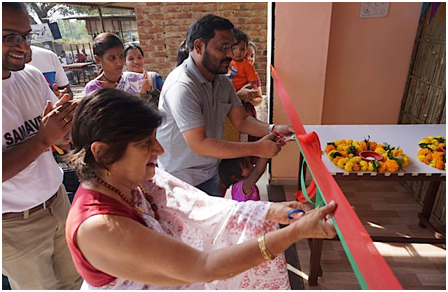 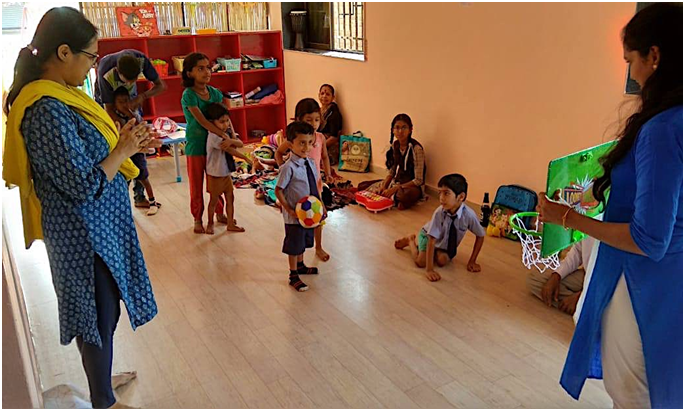 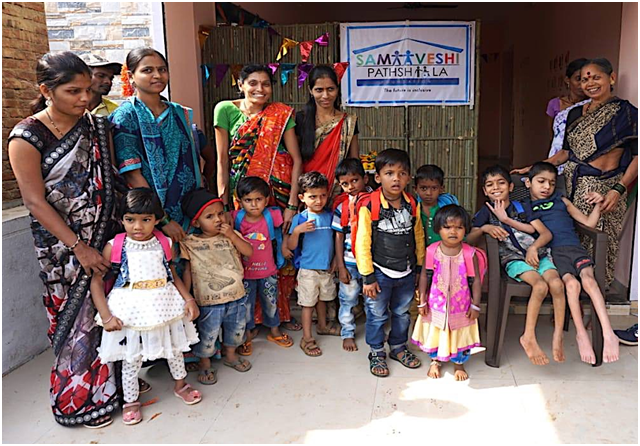